We Never Give Up

Thanksgiving didn’t quite go as we had planned. 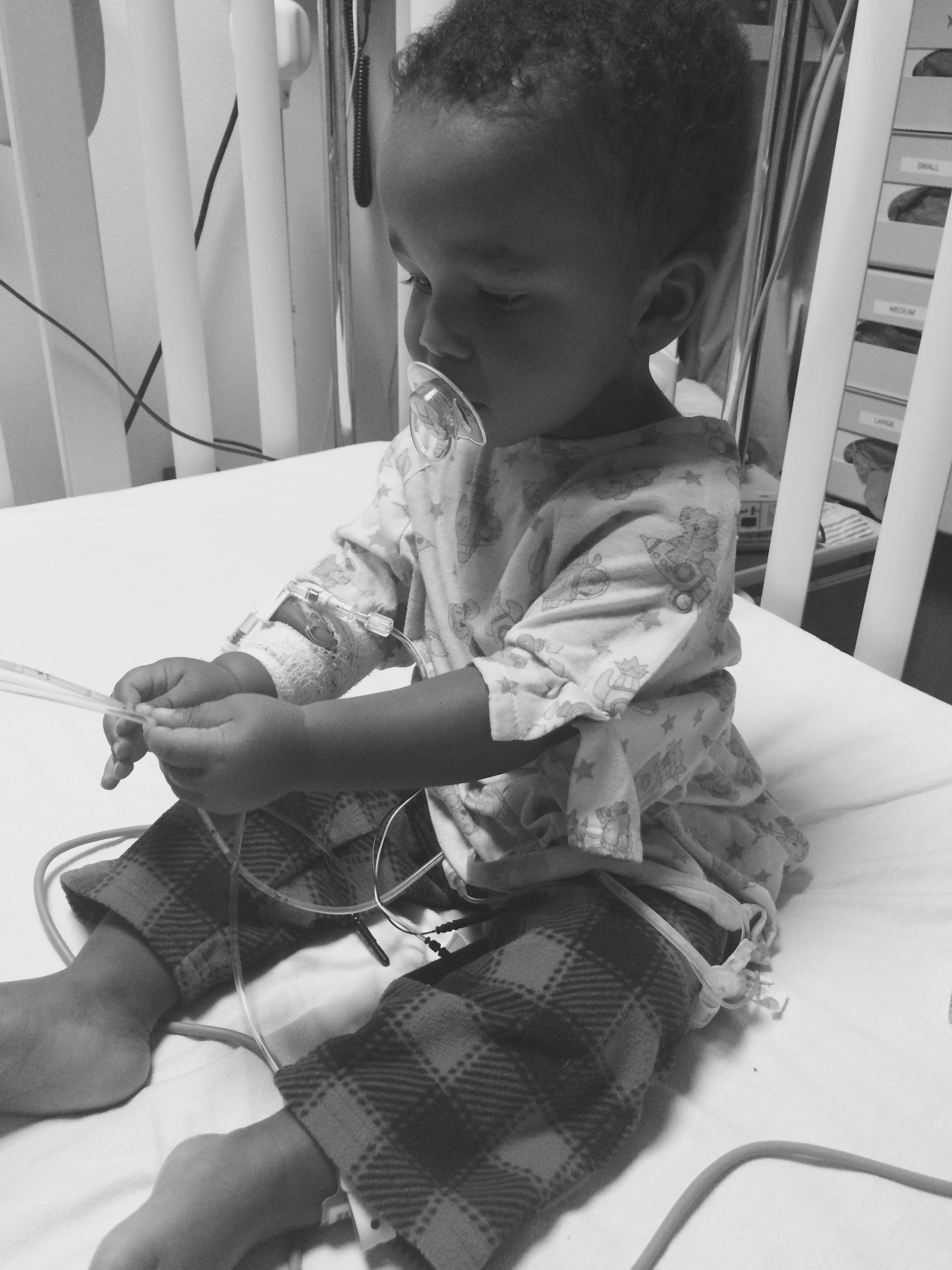 The fridge conveniently stopped working the night before Thanksgiving. We all but laid hands on the stupid thing to get it to work again, considering it held within it’s drawers most every dish we would ravish the next day. I know it sounds silly, but when I had to quit my job to stay home with our children because of Micah’s special needs, a thing like the fridge breaking is a big deal. And if I let it, could have easily send me down a thought path of fear and panic.

I whispered to the Lord about that stupid thing. Reminding Him I don’t really have a paying job right now, and how if the thing stopped working we would loose lots of food that also costs money. (Like He wasn’t aware. Or didn’t notice or something.) I think just the posture of me turning to Him was declaring my desperation of Him, regarding the fridge, even if it was a fridge. Anyways, Thanksgiving Eve started off a little wacky. We ended up going to pick out our Christmas tree which was the absolute best. Our hearts were full when we came home, and we checked on the fridge (that still wasn’t running) and went to bed.

The next morning I woke up on my favorite holiday of the year. I never do the whole “every day thankful thing in November” because I feel so strongly that gratitude should be a lifestyle. Our thanksgiving is a weapon in this war against our enemy. But I do just love one day a year that is set aside to remind us to be thankful. Sometimes we really need the reminder. All of the food, the cider, the parade, the turkey outfits, decorated table, and family, it’s just so much fun. Everyone comes over to our house each Thanksgiving. Cooking is a way I love on people, and I get to do that for a whole day! It’s just fun and it’s my favorite. Not to mention, we go to bed early so we can wake up a 3:30 am and shop like madwomen.

I had just brewed a cup of peppermint coffee to start off my favorite day of the year. The kids were still asleep, because finding the perfect tree, took some time the night before. I was waiting on my coffee to cool down before I took my first sip, I pulled the turkey out of the doors as fast as I could before any of the cold air escaped from the broken fridge, and started the turkey prep.

I yelled upstairs to Brandon, “It’s not working again!” I figured he didn’t hear me so I preheated the oven. He had walked upstairs to check on Micah and then I heard him scream for me from Micah’s room.

The worst immediately came to mind.

I ran up the stairs grabbing my phone in case we needed to call 911. Micah was laying in his bed very still, almost lifeless, and was staring at the ceiling with glassy eyes. There were gastric juices and formula from his feeding pump all over the bed. It was obvious something had happened during the night with his feeding tube. We checked his sugar and it was dangerously low. I dashed downstairs to grab the honey to get his blood sugar up and Brandon picked him up and began to undress him. I glanced at the turkey still on the counter and knew we wouldn’t get to eat it. 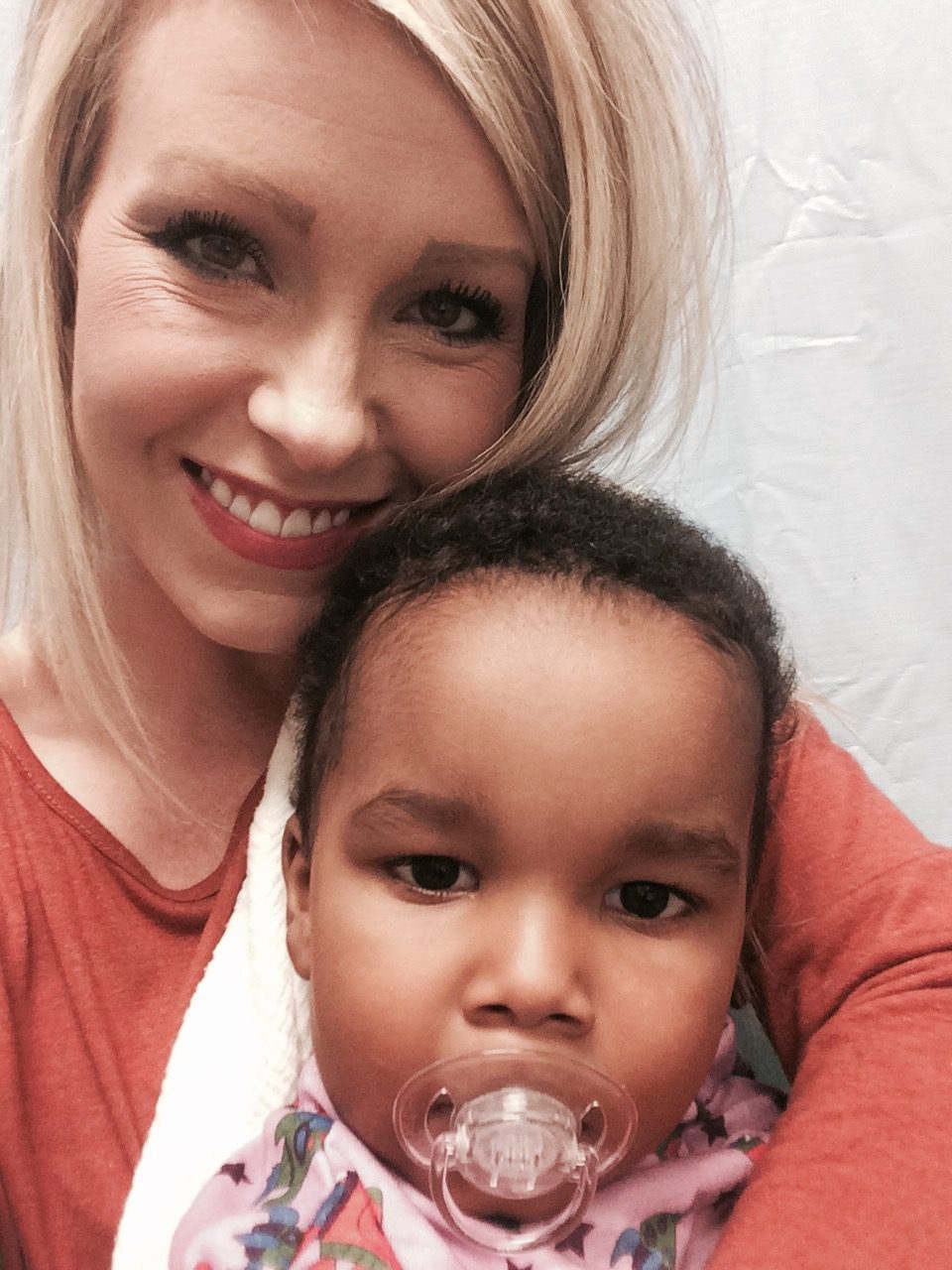 A piece of Micah’s feeding tube had stripped. Basically he had a huge gaping whole in his belly. There was no way for us to fed him which also meant there was no way for us to keep his blood sugars up. We had to wrap up his belly with an old hospital blanket until we were able to get to the hospital. We knew it would have to be surgically replaced and the likelihood of that happening on Thanksgiving day was very slim. I frantically packed our bags for a few day hospital stay. Snapped a quick picture of Selah in her sweet turkey smock, threw everything in the car, and prayed we had time to get to the hospital before Micah’s blood sugar dropped any lower.

My favorite day, a day to be thankful, turned quickly into disaster. And if I’m being honest, I wasn’t feeling too thankful about any of it.

I called my mom on the way to the hospital so she could call all of our out of town family. They were too close already to my house so they would have Thanksgiving dinner there without us. As I was driving, the panic of the morning gave way to make space in my mind to think. I began to ask all the questions. Why did it have to be today? Will we always have days like, this laced in fear with Micah? What is this doing to Selah?

The thing is, way before this happened, my heart had started to become weary. I was discouraged. I’ve been asking a lot of Father lately and still haven’t seen my circumstances change. But I’ve kept hoping and praying and trusting. Although He’s obviously big enough to handle it all, sometimes it gets exhausting, the asking. Do you ever feel that way, or is it just me? It’s hard to always rest in Him. It takes work. Not the striving kind of work, but it takes spiritual discipline to continually choose to believe His words over the screaming assaults of the enemy. I guess my spiritual muscles were just tired. So a new thing to think through and process just seemed exhausting.

I realize this isn’t pretty. It’s not something I am proud of. It’s messy and raw, but honest. I told Brandon just the other day how I wish so much I could always be like Abraham, always have faith in God’s promises. But the truth is, there was times of doubt for even him. Yet, in Scripture, Abraham is in the “Hall of Faith” in Hebrews 11, recognized for his faith in Father’s words spoken over him and his family. Gives someone like me (a doubter sometimes) hope.

Micah and I got to the hospital, were admitted, and after a traumatic event of getting his IV, were finally placed in a room. One we would call home for a few days. My heart silently grieved, like it always does when we go to the hospital, for my other baby at home. But we were there, and there was nothing we could do to change it. His life wasn’t in serious danger. He would eventually have surgery to fix his tube and life would go on. We still had each other and at the end of the day, that was enough alone to be so thankful. 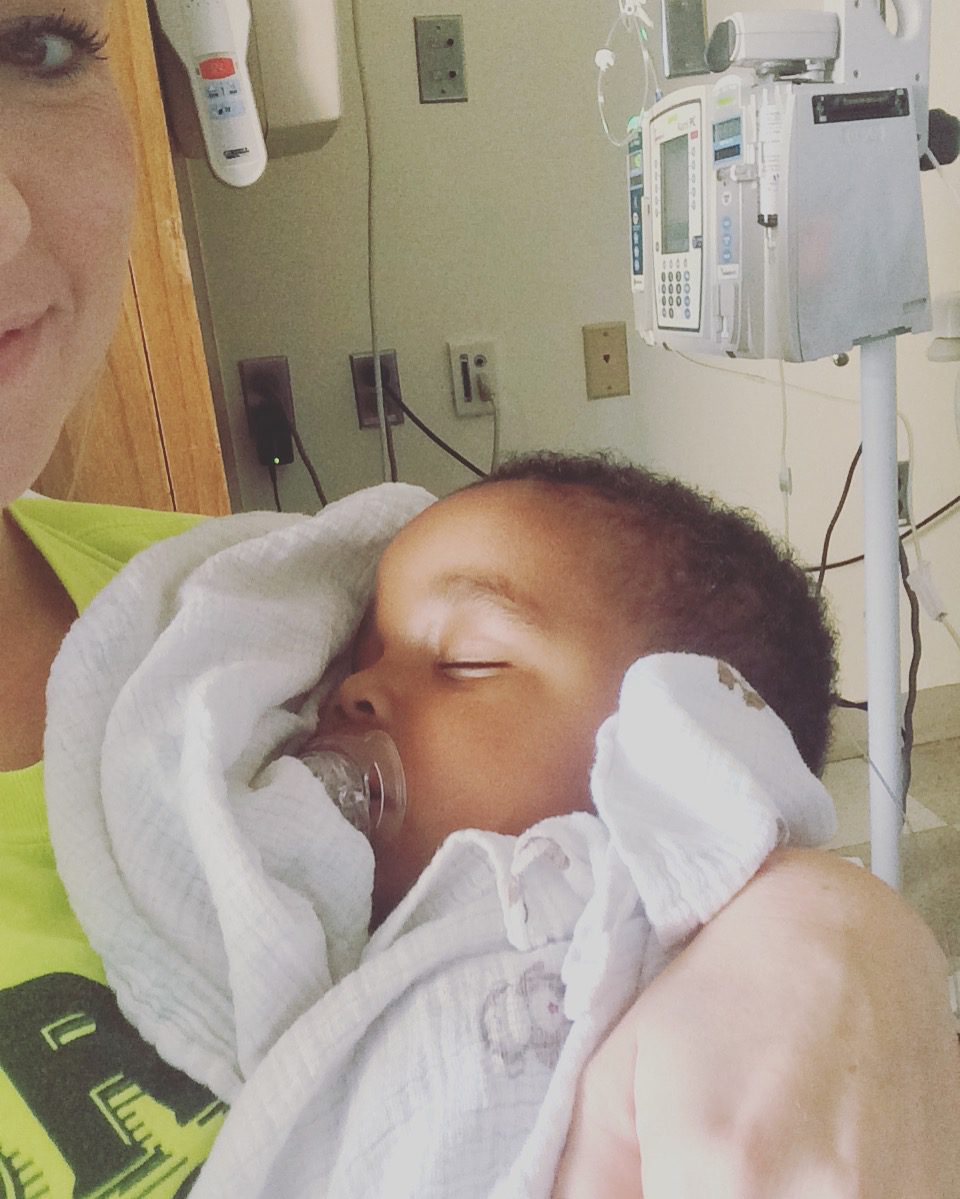 Brandon came to the hospital and graciously let me go home to eat a Thanksgiving meal with the rest of my family that came in from out of town. Although it wasn’t the same because we were missing two very important people at the table, it was a blessing, and a short time of rest in what would be extremely exhausting in the hours and days to come. 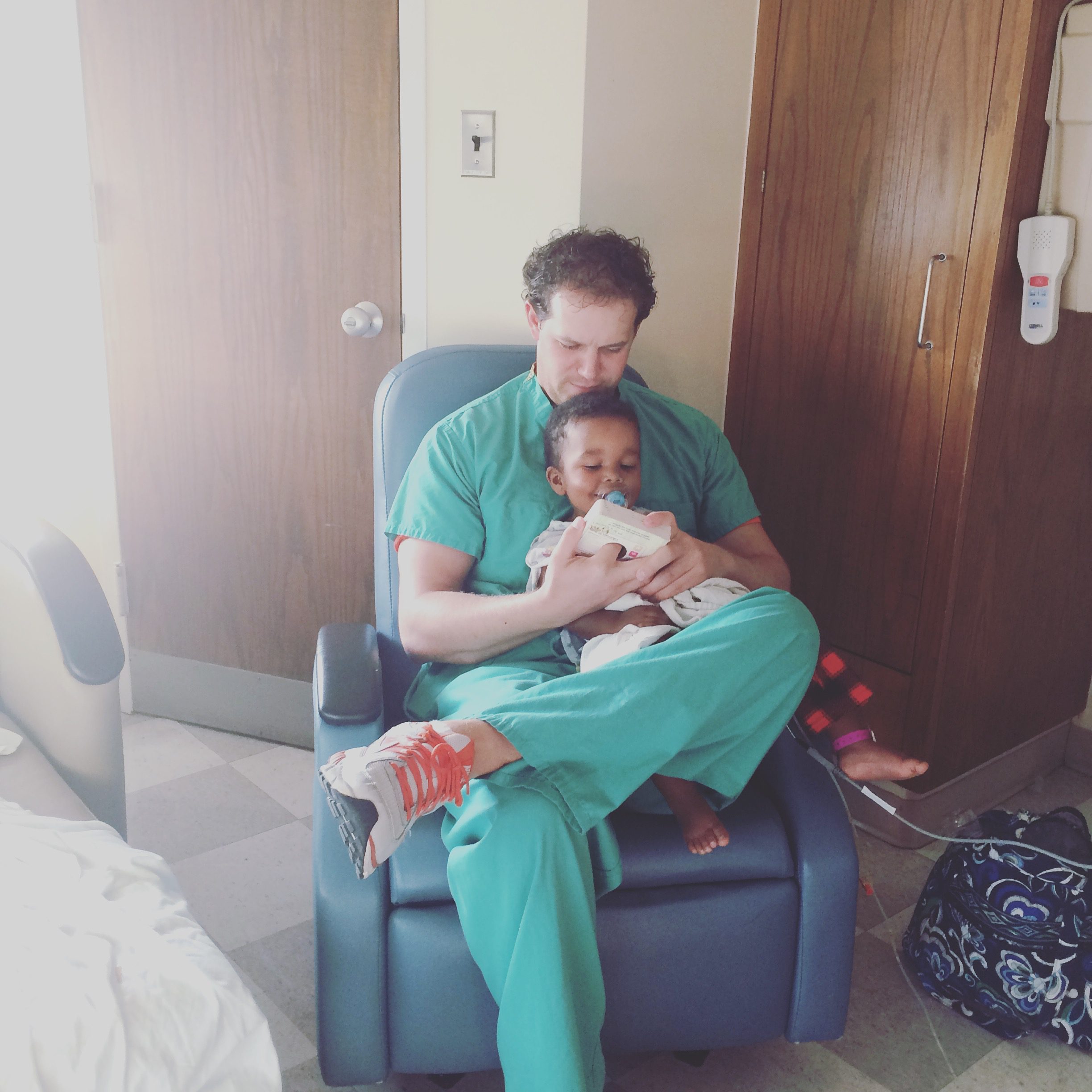 As we were eating our meal, Selah kept saying to me, “Mommy, we give up.” It’s almost like she could read the posture of my heart. She has a way about her, that girl. She knows we don’t give up in our house. We’ve kind of made it a family rule. She would wait with my response, “Selah, we never, ever give up.” She would say again a few minutes later. Over and over she said, “Mommy, we give up?” And I would say again, “Selah, we never, ever give up.” My sister leaned in over the table and with eyes that filled up with tears said, “She’s speaking that over you. She’s declaring that, making you say it over and over, you know.”

Not just because Micah was in the hospital, again. Not because our stupid fridge, stopped working. Not because we all weren’t together on my favorite holiday. But because my heart was tired of waiting. Waiting on Father. Waiting on Him to work. Waiting on the fulfilment of His promises for us. Waiting on clarity for our future. Waiting on our healing, both for me and Micah.

Father spoke loudly to me through Selah on Thanksgiving. We don’t give up. We just don’t.

Jesus is our Hope.

Some of you reading these words are right on the edge of giving up. It’s too hard. The wait has been too long. The diagnosis is too big. The loss is too much to grieve. The future looks, in our natural eyes, grim. But it isn’t.

I want so badly to reach through this screen and hold your sweet face, friend, and make you repeat after me, “We never give up,” like Selah did to me. We don’t say that because of what we see with our eyes, we say that because we place our hope in Father. The One who delights in us, and gives us a seat at His King’s table with an eternal inheritance as daughter.

We have Hope. And our Hope is secure.

Micah’s surgery went smoothly the next day. He began to tolerate his feeds quickly and after trial and error, we were able to keep his sugar up. We came home and he is back to his happy self. I didn’t quite get the Black Friday deals I was hoping for, or the perfect Thanksgiving holiday. But what I got, was so much better. 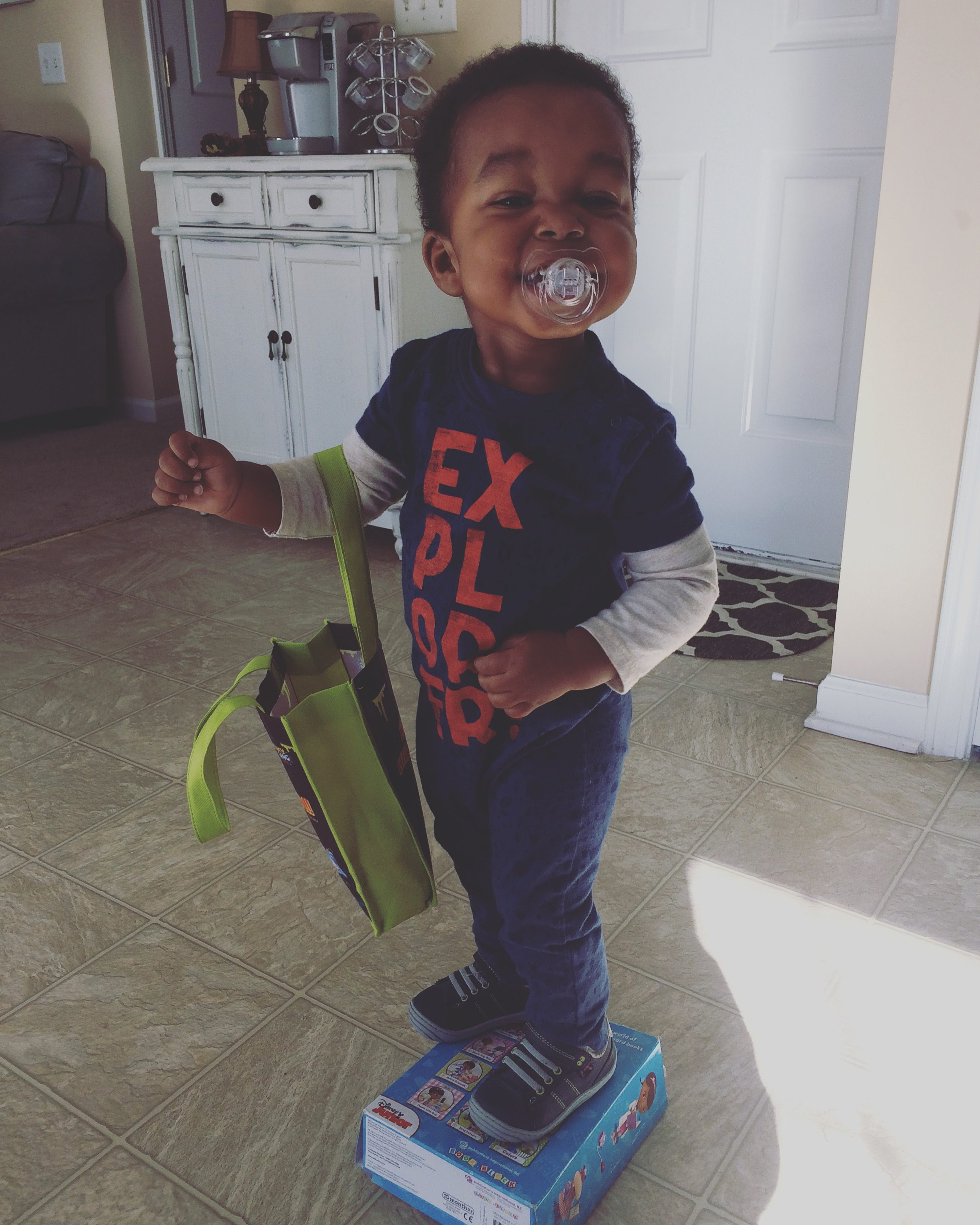 I got encouragement from my two year old to keep going. To keep asking. To keep believing. To keep hoping. To never give up and keep my eyes and heart on the Hope.

And for that, I am so thankful.

I’m also thankful you follow along with us on this journey. If you haven’t already, I would be so honored for you to subscribe to my blog. You can click on the pop up box, or you can look on the right side bar and enter your email. It’s a crazy one, but would love to have you along on this adventure!

PS God healed our fridge! 🙂 It magically started working again! He cares about those silly things, you know.